Global climate change has different regional impacts; its effects are already noticeable today. Mankind will need to adapt to those future changes. To investigate possible regional climate changes in Europe in the 21. Century and to develop adaption strategies, regional climate simulations are performed. The Climate Service Center Germany (GERICS) is involved in the development of various models and methods to provide local climate change information. The simulated model results are stored at the DKRZ and can be downloaded from there through the ESGF (esgf-data.dkrz.de). DKRZ and GERICS have jointly produced animated visualizations showing the projected key changes in temperature and precipitation for Europe during the 21. Century. 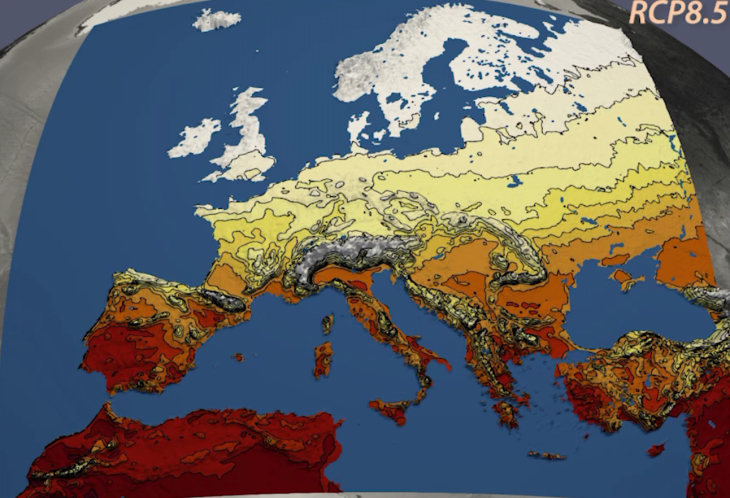 Each regional climate simulation is forced by a global climate simulation. The global climate simulations are part of the Coupled Model Intercomparison Project Phase 5 (CMIP5), which forms the data basis for the climate projections of the Fifth Assessment Report by the Intergovernmental Panel on Climate Change (IPCC) that was published in 2013. The simulations of CMIP5 are based on Representative Concentration Pathways (RCPs) (van Vuuren et al., 2011). A set of four new pathways (scenarios) was developed for the climate modelling community, which together span the range of radiative forcing values from 2.6 to 8.5 W/m² in 2100. RCP8.5 describes a continuous increase in greenhouse gases, where RCP2.6 represents a mitigation scenario that leads to a radiative forcing around 2040 of 3 W/m² and reduces to the end of the century to 2.6 W/m².

With respect to the visualization of the results, the seasonal ensemble mean of the differences between the climate projection data and the seasonal mean of the simulated time period 1971-2000 was calculated. To focus on long term trends instead of short term variability, the visualizations presented are based on 30-year running means. The ensemble mean was calculated on the basis of all simulations available in August 2018 at the ESGF (table 1). The ensemble for RCP8.5 has a different size and different members compared with the ensemble for RCP2.6.

With respect to clear and easy-to-understand visualizations intended for broad audiences, significance levels are not shown in these animations. All visualizations were produced with ParaView, a free software tool that supports 3D visualization. In order to point out correlations between the climate change patterns and the geographic setting, color filled contours were mapped onto the vertically exaggerated 3D representation of the Earth’s topography. 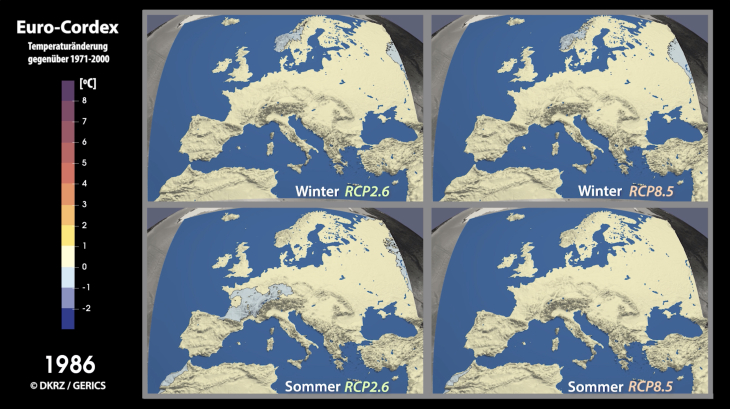 Video 1: The ensemble mean of the temperature change relative to 1971-2000 is presented as a 30-year running seasonal mean, on top for the winter season and at the bottom for the summer season. The left panels show the projected development in summer and winter for RCP2.6, the right panels those for RCP8.5.

Annual change in heat days for RCP2.6 and RCP8.5 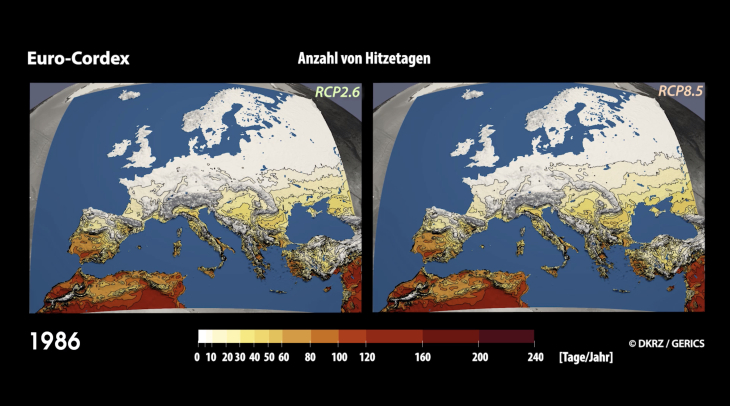 Video 2a: 30-year running mean of the number of heat days (days with daily maximum temperature ≥ 30°C), left for the ensemble of RCP2.6 and right for RCP8.5. 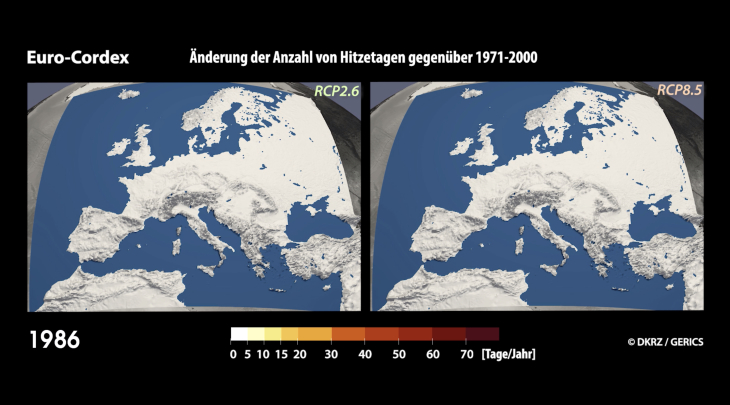 Video 2b: The ensemble mean of the change of number of heat days relative to 1971-2000 is presented as a 30-year running mean, left for the ensemble of RCP2.6 and right of RCP8.5

Seasonal Change in Precipitation for scenario RCP2.6 and RCP8.5 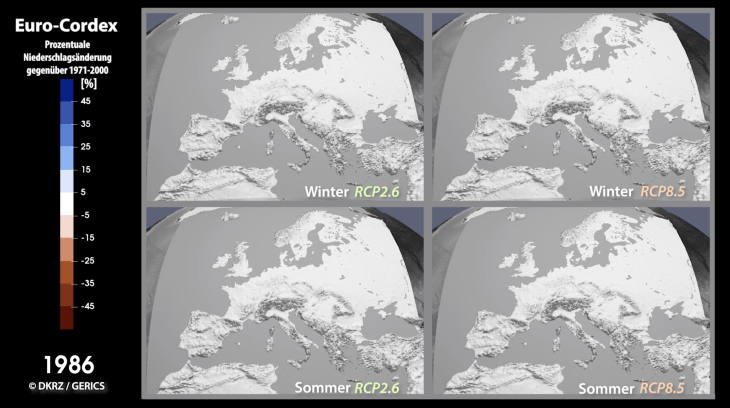 Video 3: The ensemble mean of the precipitation change [%] to (1971-2000) is presented as a 30-year running mean, on top for the winter and at the bottom for the summer season. The left panels show the projected development in summer and winter for RCP2.6 and the right panels those for RCP8.5.

Technical Information about the REMO Simulations

Five of the RCP8.5 simulations were conducted within the ReKliEs-De project which was funded by Federal Ministry of Education and Research under the number 01LK1401.

The EURO-CORDEX region with 0.11° horizontal resolution covers 433x433 grid boxes and 27 vertical levels. REMO uses a time step of 60 s and consumes 527 CPUh for one model month on mistral (12 nodes/ 24 tasks). The results require a storage volume of about 95 Gigabytes per model month. The simulation of one model month takes around 100 minutes in real time.

EURO-CORDEX is actively supported by 30 modelling groups. It is a voluntary effort of many of the leading and most active institutions in the field of regional climate research in Europe and is coordinated by D. Jacob together with E. Katragkou and S. Sobolowski. EURO-CORDEX (similar to the entire CORDEX initiative) is not providing funding to any participant, but is fully relying on the enthusiasm of the participating researchers and institutions. This enthusiasm is based on the aim to improve climate projections, in order to enable the European society to better adapt to unavoidable climate change and to design more efficient mitigation strategies. (More information: www.euro-cordex.net).